In 1933/34  Raleigh  decided that it was going to halt production  of its LDV van which was now on its third model. Raleigh did not see a market for these vans and was going to concentrate on its bike production.  The LDV van was designed by Mr. Williams and he believed that there was a market for it. So when he left Raleigh he took his plans with him and then built his prototype in 1934. This was put together in his back garden in Kettlebrook, Tamworth. He completed and licensed the vehicle on the 1st January 1935. The first Reliant was a three wheeled 7ctw van. Power was via J.A.P’s 600cc single cylinder unit developing 15 hp. Drive was then via a 1/2” simplex chain to a Burman three speed with reverse gearbox. (The gearbox as with the engine could be found on big bikes of the day the only difference is that the bike has four speeds.) The drive is then transmitted to the rear axle via a 1/2” duplex chain.

The driver in the first vans sat astride the engine and gear box and the accelerator was a hand control under the steering wheel. Brakes were rod but very good at their job with being such a small and light van.

Then towards the end of 1935 Mr Williams listening to his customers and in June 1936 changed the engine to a 750cc V twin J.A.P unit. This allowed the use of a standard type gear box allowing the driver to sit at the side and a passenger space on the left. Also these vans only used one chassis unlike the 1935 model which needed two.

There is many a story from Reliant employees of how the bodies were made in one work shop and the chassis in another and when needed men would push the body which was on a trolley across the road to be assembled. Body size now increased to 8ctw and there was also an option of a 12ctw van. In these years the vans never had model names just there capacity for their model type.

In 1937 Mr Williams visited the 1937 Commercial vehicle show and  Reliant acquired the supply of the 750cc 7hp side valve Austin 7 engines for their vehicles and started production in 1938 and  continued to use until 1939. At this point war had broken out and like all manufacturing Reliant switched to making animation for the war effort. During this time Mr Austin had announced that they were no longer going to produce the 7hp Side valve engine that Reliant was using before the war so once again they were without an engine. So Mr Williams built his own engine based on the Austin 7 engine. With the extra power that this engine gave the van the range now include a 6ctw, 8ctw, 10ctw and a 12ctw van. Increasing the boy size was a simple job as it was just a case of adding more chassis sections into the frame.

The vans though changing under the skin never changed in looks right up to 1953. In 1950 the vans for the first time were given names which were the Regent and the Prince Regent.

Very few Reliant adverts from the time are known but there are a few just here.

Reliant production spanned 65 years but where did it all start? 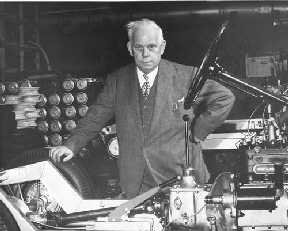 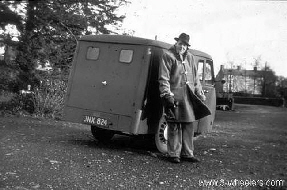 Mr Es ‘Tommo’ Thompson co founder of Reliant, read an account on the early years written by his son